I know, I know. You’re reading the title of this post and thinking “What are you talking?”. I am talking about two different subjects altogether, but I do have a point. A rambling point, maybe, but a point nonetheless.

One of the challenges I find in creating personal work, is trying to come up with an idea for a project or drawing. I’m guilty of something I call “idea purgatory”. It’s where I spend more time thinking that actually doing. There’s a wealth of ideas and inspiration out there on the web, but mostly, it’s more harmful than helpful, and it can quickly feel like I’m drowning its depth. I remember this distinctly when I was in design school, when the row of us students would sit in front of our computers, trying to come up with ideas for our next project. I’d search endlessly online for inspiration – something that would turn on the “great idea” switch in my brain – but it was hard to get anywhere that way. My eyes and senses were bombarded with other people’s brilliant work, and I started becoming blind to my own ideas and intuition. (By the way, I’m not in any way against looking at other people’s work. Quite the opposite. If there’s an artist out there that you can’t stop admiring, then study it closely. Imitate it. Learn from it.) It was during one of these times of total unproductivity that I remember a teacher telling us off. “What the hell is that going to do by just looking?” he said. “Do something with it! Make something!”

This story isn’t exactly inline with coming up with an idea, but it did instill something important in me: Action speaks louder than words, and that is especially true when it comes to making creative work. I could spend all the time in the world trying to come up with the next brilliant idea for my project, but it’s just not as productive and fulfilling as actually creating the work. That being said, I still struggle with idea purgatory to this day. Luckily, I’m getting better at managing myself, my productivity levels, being ok with the fact that not all my ideas are going to be great.

Which brings me to this post’s illustration. While having one of my bouts of idea purgatory, I suddenly started thinking about the wonderful lunch boxes that you could get at every major train stations along the Shinkansen bullet trains. You could buy a small bento, or Ekiben (boxed lunches at train stations) and take it onto the train with you to eat. Ekiben often features regional specialities, so I’d make the point of picking one up, along with a can of beer (you’re allowed to drink on the trains), whenever I traveled by Shinkansen. It was wonderful. Really. In my opinion, this is the height of civil travel. Salted mackerel; pickled vegetables sitting next to perfectly rolled egg omelette; red bean rice sprinkled with sesame seeds; seafood sitting in beautiful pearl shells; the tart and sour taste of umeboshi; pink desserts dusted with white powder sitting in tiny ruffled paper cups. I’d crack open the packaging of my ekiben as soon as the train started moving, and I’d sip my beer and eat as the scenery whizzed past my window.

Why not create my own story and illustration for it?

This style is a bit of a departure for me. I usually stick to bold, simplified lines, and colouring the rest in Photoshop. It came from a moment of doodling using a pencil brush I normally reserve for sketches on my iPad. There was definitely something very methodic and calming about colouring with the pencil brush. It reminded me of the ever popular adult colouring books that claim to administer the same soothing qualities into its colourer.

So, all in all, though I’m not going to stop looking at other people’s work, I do know that I need to spend less time looking, and even thinking for that matter, and just start doing. I’ll experiment with leaving the thinking to the end, after I’ve done the work, and decide then whether it’s something I could keep going with or move on from. I imagine this will be an ongoing balancing act, but at least now I’m armed with at one temporary quick fix for idea purgatory: If ever in doubt, I’ll just think back to those trips along the Japanese countryside with an ekiben and beer in hand. Hopefully, there’s an inspiration for my next illustration close by.

This site uses Akismet to reduce spam. Learn how your comment data is processed. 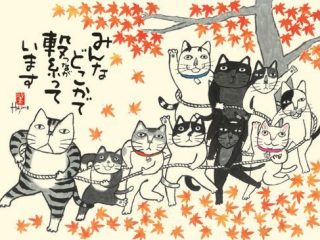 Next Post (n) Inspiration Of The Day: Okamoto Hajime

This image is protected and can not be downloaded.